The following are the (minimally edited) notes I’ve taken while attending the session at AWS re:Invent conference in Las Vegas, NV on 27-30 November, 2012. 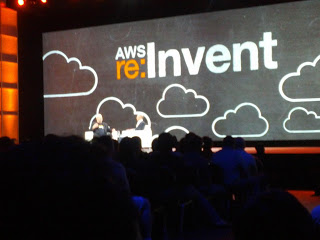 It is clear we are still at the ‘dawn age’ in cloud computing and PaaS in general: although AWS provides a rich API and lots of flexibility, if one draws a parallel with the evolution of programming languages, choosing which type of instance one should run one’s own webapp, is a bit like having to do ‘register allocation’ before compilers came round.
Considering the rise of mobile computing and the obvious fit between thin mobile client and cloud deployments, cloud-backed ‘Personal computing’  is the next trend.
There has been great emphasis (later even more strongly stated by Jeff Bezos) on the strategic difference between low-volume/high-margin and high-volume/low-margin model for the provision of public cloud services, with AWS firmly in the latter camp.
Reed Hastings (Netflix CEO) made an appearance and a testimonial about how AWS enable them to grow 1,000x over 4 years to 1BN hours/month watched streaming: this would have not even been thinkable on a self-owned data centre, let alone affordable.
Having access to a vast (and continually evolving) set of infrastructure services has enabled Netflix Engineering team to focus on ‘higher order’ problems and concentrate their efforts on their core business.

He also announced that ‘House of Cards’ w/ Kevin Spacey is coming out in Feb!

AWS is all about innovation

Amazon Redshift
“Amazon Redshift is a fast and powerful, fully managed, petabyte-scale data warehouse service in the cloud. Amazon Redshift offers you fast query performance when analyzing virtually any size data set using the same SQL-based tools and business intelligence applications you use today.”
http://aws.amazon.com/redshift
They have conducted an experiment with a subset of Amazon Retail data, 10x faster queries on 2BN rows

Also ‘test drive’ to try it out

Data Planner
Integrated with other AWS services
Uses UI to drag-n-drop components
Connect logs generated to S3, EMR
It has scheduler and pre-conditions
They use the same ‘pipeline’ term
Can run ‘bash’ scripts stored in S3

Screenshot of the demo
Update: This has now been officially launched as the Data Pipeline, which is an exciting validation of SnapLogic‘s concept of integration flows as Snaps and Pipelines (see here)

Enterprise on AWS, no longer an ‘if’ but more a matter of ‘how far’

Suitable for CPU intensive apps, where processing must not be executed in the context of the Web UI

All this can be done via Eclipse AWS SDK

In particular, you can see all S3 buckets, and explore its contents (including virtual directories); drag-and-drop works to/from the local filesystem
(note after upload, only owner can see — web ui can’t access: right click and set permission)

Explorer shows the tables on DynDb, create new tables, edit r/w capacity
DynDb editor shows just a page of results by default; can add a ‘scan condition’ to filter only a certain subset
Changes must be ‘saved’ to the actual db (using std ‘save’ cmd)

Can also execute remote debugging against a running instance.

Stores 2-weeks worth of information, data can be pulled and pushed into long-term storage, analysis, map-reduce…

When benchmarked for latency, CloudFront is 1st or 2nd v. Other CDN in US and other regions

It used to be the case that, to upgrade a cluster of web servers, all sitting behind a LB, one would follow the usual pattern:
Awesom – the real problem is when, halfway through the upgrade, it turns out that a rollback is needed: at this point, you have a large number of servers, all in flux, without an easy way to tell which ones have the ‘new’ release, and which ones the ‘old’ – this could be a real operational nightmare.
Turns out that, at current prices, it’s a lot more cost-effective to just:
Don’t make things more complex than they need to be

Design Architecture with your customers in mind, then use ‘late binding’ to pick which infrastructure serves you best

The python app can be developed as usual, without any change necessary.
Recommended the use of virtualenv:
virtualenv ./venv1

eb is a command-line tool to manage beanstalk
eb init
To create the env – generates the info to create it then use
eb start
to actually deploy and get it start.
eb status
to check status.
There is also an ini file that is read in ~/.elasticbeanstalk

EB uses also git integration to push the source/binary to the cloud:

Options can be found in: .elasticbeanstalk/optionsetting

It also allows to drive AWS AutoScaling triggers to start new EC2s (behind a LB); look for:

Overall it seemed like an interesting tool (the talk really went too fast to take any meaningful notes), I recommend reading the documentation here.